Making the most of her gift Sandy Derr 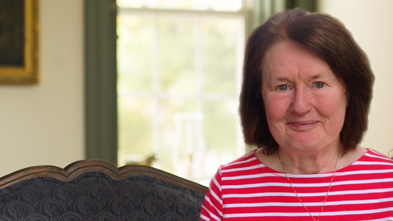 When you ask Sandy Derr ’69 why she went to Lycoming, she’ll tell you, “It was by default.”

Having been diagnosed with juvenile diabetes at the age of 15, larger state schools rejected her applications for enrollment, despite having graduated sixth in a high school class of 106. It was only after she took a job working in the office of a factory in Montoursville that she considered Lycoming College. “A coworker who was enrolled at Lycoming suggested I take some night classes there. The next year I enrolled full-time,” said Derr.

Derr decided to hold on to her factory job to help pay tuition, but the College was able to secure occasional financial aid for her, which helped lighten the load shouldered by Derr herself.

An English major, Derr taught in elementary schools for most of her career, and managed to stay close with some of her classmates, namely Cynthia Mihal. She is impressed with the solid reputation that Lycoming College boasts these days.

Derr gives back to the College that did so much for her. As a widow, she fondly recalls conversations with her husband where they would talk about the strong impact that college made on their lives. “It enriched our thoughts, created new interests, provided good opportunities,” recalls Derr. “We were both aware that education was helpful and interesting to both of us, so when I turned 70½ and realized I would have to take a required minimum distribution from my IRA, I decided to donate to both of our undergraduate schools.”

By donating her IRA to Lycoming College, Derr was able to avoid paying taxes on the distributions. “With this arrangement, Lycoming has the full benefit of the money in my IRA and neither I, nor Lycoming must pay taxes.” Derr also supports the College’s Student Retention Fund, which provides critical resources to Lycoming students who perform well academically, but are at risk of not completing the degree because of financial hardship.

Derr believes charitable giving is important for all to engage in, and also makes regular contributions to the Lycoming Fund. “It’s the price we pay to live in a human society. Not everyone can give the gift of money, but others can give time, tutoring and lots more. I’m happy to give by supporting scholarships at Lycoming.”