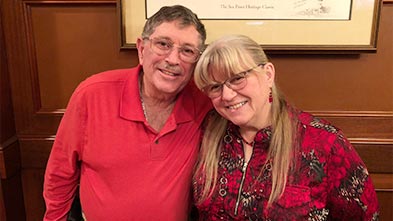 When Gwendolyn and Raymond entered Lycoming College, freshmen wore blue and gold beanie-style “dinks,” and it was at a Dink Dance in the Student Union where the two first met. During their time at Lycoming, Ray enjoyed performing and traveling with his friends in their rock band, The Illegitimates. “We played in numerous venues in western Pennsylvania and New Jersey as well as on campus,” he said. Wendy enjoyed playing flute and performing with the Lycoming College Concert Band under the direction of Glen Morgan. “Highlights from Lycoming include the friendships solidified on band tours and at band camp — a fun, week-long music camp held prior to school opening,” she recalled. The couple also enjoyed attending TGIF dances in the Student Union.

“Our Lycoming experience was where we met each other, and it was very formative in our lives,” said the Enstines. “Our liberal arts education helped us to better engage in critical thinking and careful listening in order to form opinions and make better decisions when dealing with life’s challenges.”

In 1968 after he graduated from Lycoming, Ray was drafted into the U.S. Army. He served in the Vietnam War, rose to the rank of sergeant, and received the Bronze Star. During her junior and senior years at Lycoming, Wendy played the challenging role of being the supportive fiancé while Ray served his country.

Ray had a 30-year successful career in the family propane business, retiring as president of Pulver Gas in Bridgehampton, N.Y. He was active in serving on various business and industry committees, associations, and councils, holding offices at the regional, state, and national levels. Throughout Ray’s career, Wendy supported him by helping with projects at home and attending different state and national meetings and conferences.

The Enstines have been fortunate to be able to donate both time and resources to numerous national, community, school, and church groups over the years. From their ambitious American Red Cross disaster relief efforts to establishing educational programs that aim to end systems that fail many young people, their volunteerism and service to communities around the country is inspiring.

This passion has continued at Lycoming, as they have committed resources to establish an endowed scholarship and internship program. “Our parents sacrificed to send us to college, and we felt an endowed scholarship was a way to honor their sacrifice,” they said. “Life has been good to us, and we feel moved to give back. We feel it is important to have collaboration between the liberal arts classroom study and one’s career path, and internships are an important part of that process.”

The Enstines added, “We feel that getting a college education has become more difficult for many, and we hope others who are able will desire to give back — or pay it forward — in this way.”